You must have heard about the YouTube sensation Kevin Samuels. He is an image consultant turned dating advisor who took the internet by storm over 2 years ago. He is considered to be a standout in the new Black Manosphere and has influenced hundreds of thousands with his videos and views on dating.

As you would expect, there are several diverse opinions about Samuel and what he speaks on. One particular group, the Faithful Black Men Association, isn’t a fan of his messages.

In one of their tweets, they advised his audience to do a background check, and Kevin Samuels’ opinions wouldn’t even be relevant in the first place.

If only some of y’all did background checks like this on these trash ass men y’all decide to date Kevin Samuel opinions wouldn’t even be relevant right now 🙇🏾‍♂️ https://t.co/EZOlqm8rxB

On the opposite side of the pendulum, we have Erica LeShai, aBblack woman who defends Samuel. She explains that while she may not agree with everything Samuel says, his voice is still necessary.

But who is the man behind the hype?

Kevin Samuel currently has around 1.27 million subscribers on his YouTube channel, which features some of his most popular videos.

If you ever visit his page, you can check out some of his most popular videos, such as “Do Modern Women Want More Than They Deserve?” “Do High-Value Men Deserve To Cheat?” “Ladies, the Older You Get, The less You Get.”

Although he has had an online presence for many years, he went viral on Dec. 9, 2020, where he posted his now infamous video, “You are average at best.”

This video has over 2 million views to date. It would seem that his blunt critique of modern women who want it all and men struck a nerve and created a movement.

2. Kevin Samuels Has Something to Say About Everything

Samuels has been accused of creating content that criticizes Black women specifically. However, he has also published content and opinions that attack Black men as well. 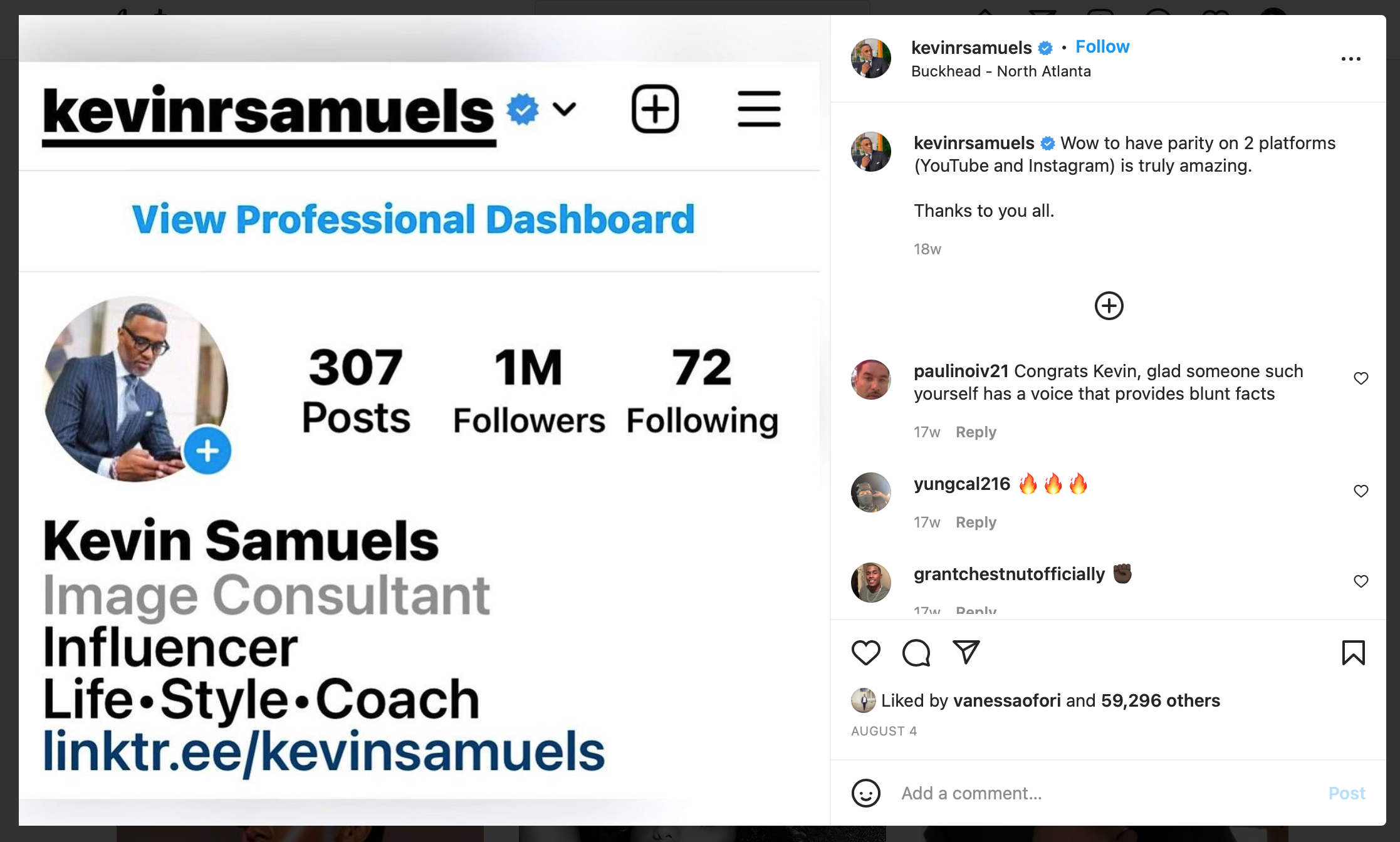 Samuel says he believes in dishing out brutal honesty. When speaking to the people he coaches, he tells the ugly truth about where they are and the reality of where they want to get. He makes them understand just how difficult achieving that goal will be and how much work they must be ready to put in.

There seems to be some bad blood with Kevin Samuels and Dr. Umar Johnson. Dr. Umar Johnson is a Black thoughts leader, and he has made subsequent posts aimed at Samuel. He calls Samuel out for what he calls misogynistic attitude towards Black women.

In Johnson’s opinion, Samuel is profiting from “slandering and criticizing Black women who deviate from what he considers the Eurocentric standards of beauty and success.”

Dr. Umar on IG Live with all smoke for Kevin Samuels 😭 pic.twitter.com/vnEGoZvAkc

Samuels in turn questions the morals of Dr. Johnson, who is still yet to open his much advertised school with money contributed by his fans. He spared no words in this beef and went on to highlight the fact that Dr. Johnson, who at the time had two children from two women he never married. Kevin went on to mock Dr. Umar before finally giving him a shout-out and saying he had no problem with him.

Ever since then, there have been allegations and wisecracks that have been exchanged between both men. Things have sometimes gotten so heated up that some of their fans on the internet are calling for a Verzuz battle between the two.

4. Kevin Samuels Got the Image

Samuels started his career in advertising and marketing, where he was noticed for his trademark tailored suit. He then left the marketing industry in 2013 and launched his own image consultancy firm in Georgia.

On his Linked-in profile, Samuels speaks on how he has always been passionate about style and fashion. With his background in sales and marketing, he learned how valuable looks could be and ensured he dressed to catch the attention of everyone in a room.

Samuels believes that looks do affect performance and promotion. Considering that he now makes a living off his personal brand, we can say that his image played a role in his success.

In one of his YouTube episodes in March 2021 titled “High-Value Men Cheat,” Samuel calls out a female caller who had an issue with the topic. He said she had no right to give her opinion because she was built like a football player.

Samuels told another called she could either “buy a dog, die alone or get a girl” or she should accept a high value cheating man because cheating is in the nature of high-value men.

These are the type of remarks that made Samuels famous and also brought on an onslaught of criticism. But what’s very clear is that Samuels absolutely loves creating controversial content as that has become his trademark.

6. Kevin Samuels’ Fashion Career Kicked Off with A High-Powered Woman.

Although Samuels was always into fashion, his big push as an image consultant came after he helped a high-powered female attorney who was about to become a judge.

In an interview with Undercover Oklahoma in 2016, Samuels said that his final push into the fashion universe came when he was working on a PR project for an attorney. She asked him to put everything on hold as she had an upcoming interview with the governor.

The attorney needed his opinion on her wardrobe and image. She also asked if he could accompany her to pick the ensembles, which he was happy to do. The magic question that followed was “How much do you charge for that?”

It was at this moment Samuels realized that he could do this as a business. And the cherry on top was that he loved fashion, so why not?

7. So What’s Kevin Samuels’ Net Worth

Kevin has an estimated net worth of $2-$3 million as of 2021. In his possession is a showroom of property in Los Angeles and luxurious cars like Bentley and Rolls Royce.

The YouTuber began accumulating his wealth from his time in a corporate office, where he started as a business manager at Office Depot. During his three and a half years there, Samuels drew in a lot of clients for the company for which he was handsomely rewarded.

In 2009, Samuels joined Supermedia, where he worked in advertising as an internet sales agent.

With his growing popularity on YouTube, Kevin Samuels now makes money through brand endorsements and his social media accounts.

Tutnese: The History Of The Mysterious Language Game